UP Chief Minister orders for the Majithia Award Implementation Report 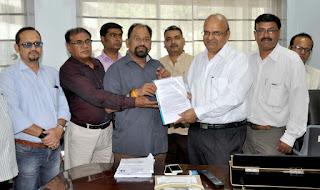 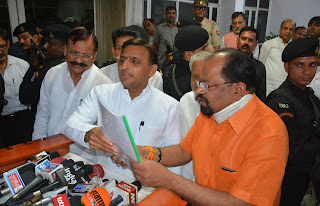 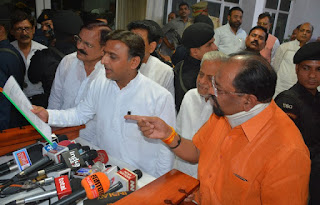 Lucknow : The Uttar Pradesh Chief Minister Akhilesh Yadav has taken a serious note of the memorandum submitted today by the Indian Federation of Working Journalists [IFWJ] which pointed out that despite the unambiguous order of the Supreme Court the State Government has failed to file the status report on the implementation of the Majithia Award. The order was passed a year ago on 28th of April 2015. The delegation apprised the Chief Minister that newspaper owners were adopting all nefarious and wicked methods to deny the wages and allowances to their employees and officials of the labour department appeared to be complicit with proprietors.


The slackness of the government in not filing even the status report was causing huge concerns among the workers. The IFWJ delegation was led by its Vice President Hemant Tiwari and the Secretary (North) Sidharth Kalhans which included TB Singh, Mohd. Kamran,Bhaskar Dubey,Utkarsh Sinha,Naved Shikoh,Rajesh Mishra , Mohd. Athar Raja and Shabadat Hussain Vijeta among others.

The Chief Minister assured the delegation that he would see to it that not only the status report was immediately filed in the Supreme Court but was fully implemented on the ground. He directed the Chief Secretary to take urgent and necessary action in that regard. He told the delegation that his government was committed to fully complying with the orders of the Supreme Court and more so if they were pertaining to the working class. He reiterated that his government would not brook any delay in extending help to newspaper employees.

Earlier in the day the delegation also met the Chief Secretary Alok Ranjan, who issued the orders then and there in the presence of the delegation to the Principal Secretary [Labour] for sincerely complying with the orders of Supreme Court. The delegation leader Hemant Tiwari told the Chief Secretary that the obstinate attitude of the owners in not implementing the Majithia Award was causing unrest among journalist and non-journalist employees. The owners have let loose the rein of oppression by adopting various tactics like transferring, re-designating or downgrading the employees, said Shri Tiwari

The delegation also told the Chief Secretary that the newspaper owners were resorting to fraud and forgery to deny the legitimate rights of employee. He demanded that the strictest possible action should be taken against the owners, who were guilty of throwing the laws of the land to the wind. The delegation handed over a 21-point questionnaire to the Chief Secretary, which will help the state government prepare the correct status report on the implementation of the Award.

It may be mentioned that 70 and odd Contempt Petitions have been filed in the Supreme Court against the newspaper owners and most of them are filed by the IFWJ Secretary General. The cases are being heard by the bench of Justice Ranjan Gogoi and Justice P C Pant. The next date of hearing has been fixed on 19th July.