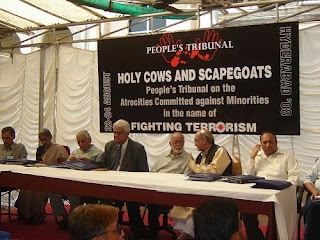 By MAHTAB ALAM
"The victimization and deionization of Muslims in the guise of investigation of terror offences is having a very serious psychological impact on the minds of not only the families of the victims but also other members of the community," the jury member of the People’s Tribunal made this observation after hearing 40 victims or their family members from across the country deposed before them .
The tribunal has been set up to hear the cases of atrocities, torture, harassment and victimization by the police and intelligence agencies of the members of Muslim community in the name of fight against terrorism, held in Hyderabad from 22 -24 August.
The tribunal, comprising jury members including Justice S.N. Bhargava, former chief justice of the Rajasthan High Court, Justice Sardar Ali Khan, former Chief Justice, Andhra Pradesh High Court and former Chairman of National Minorities Commission, Mr. K.G. Kannabiran, Senior lawyer, Mr. Kingshuk Nag, resident Editor, Times of India, Mr. Lalit Surjan, Group Editor, Deshbandu Hindi Daily, Prof. Ram Punyani, activist-intalectual, Prof. Rooprekha Varma, former V C of Lucknow University, Dr. Asgar Ali Engineer, noted Civil Rights Activist, Mr. Prashant Bhusan, Supreme Court Lawyer-Activist and Prof. Hargopal of Hyderabad University.
After hearing complaints of victims or their family members, of police torture in the name of fight against terrorism, national-level People's Tribunal made following interim observation and recommendations.
Interim Observations

The testimonies showed that a large number of innocent young Muslims have been and are being victimized by the police on the charge of being involved in various terrorist acts across the country. This is particularly so in Maharashtra, Gujarat, Madhya Pradesh, Andhra Pradesh and Rajasthan, though not limited to these States.

In most of the cases, the persons picked up are not shown to be arrested by the police until many days after their arrest in gross violation of the law. Their families are also not informed about their arrest. In many cases, they have been tortured in Police custody and made to "confess" and sign blank papers. The police has been often humiliating Muslim detenues on the ground of their religion. The testimonies show widespread communalization of the police across states in the country.

In most of these cases, the Courts are routinely allowing police remand and not granting bail, merely on the police statements that they are required for further investigation. They do not examine whether there is any evidence against the accused. Unfortunately, the media too uncritically publicizes the charge and allegations leveled by the police. This has resulted in the destruction of the lives and reputations of a large number of persons so picked up by the police who have later been found to be innocent.

When the police charge sheets the victims, the trials go on almost interminably during which poor victims are virtually defenceless since they are often not even able to get lawyers. In some cases, Bar Associations have been preventing lawyers from appearing on behalf of persons accused by the police of such terror offences. However, though this is gross contempt of Court, the Courts have not taken action against such Bar Associations and lawyers who are coercing other lawyers in this manner.

Even when the victims are acquitted or discharged on being found innocent, they are not compensated for the destruction of their lives and reputations. Even when the case against the victims is found to be totally cooked up, no action is being taken to hold the concerned police officials accountable. This has led to an impunity among the police officials as a result of which they are casually and callously picking up and victimizing innocent persons, particularly Muslims, sometimes to extract money from them.

It was been reported by the victims that those citizens who are picked up by the police officers for interrogation and are subject to repeated harassment and torture, are implicated in false cases even after release or acquittal and are further subjected to mental and physical torture.

Unfortunately, the Courts are going along with this behaviour of the police and are virtually ignoring allegations of torture in police custody. Hardly anyone is being held accountable for the torture and third degree methods that are being routinely practiced in police and even in judicial custody.

Unfortunately, the Human Rights Commissions which should have taken suo moto cognizance of such victimization and violation of human rights of these people have by and large been treating even complaints about this with casual indifference. They either do not take up such cases on the ground that they are the subject matter of court proceedings or just ask for a routine police report without getting any independent investigation done on such serious charges of human right violations.

This victimization and demonisation of Muslims in the guise of investigation of terror offences, is having a very serious psychological impact on the minds of not only the families of the victims but also other members of the community. It is leading to a very strong sense of insecurity and alienation which may lead to frightful consequences for the nation.

Interim Recommendations
1. State Human Rights Commission and National Human Rights Commission and State Minority Commission should take up such matters seriously and should come to independent finding itself and awarding adequate compensation in suitable Cases. It should not wait for somebody to approach the commission but should take action Suo-moto. They should utilize their own agency to find out the truth. The malafide prosecution of innocent persons is also a serious violation of Human Rights which must be vigorously pursued by the Human rights Commissions.
2. The courts must not routinely grant police or judicial custody but must examine at that stage whether there is any credible evidence against the accused. The Courts should keep in mind that no reliance should be placed on the alleged confession of the accused even for consideration of bail/remand.
3. Whenever any person is released by the police for want of evidence against him the Courts should award adequate compensation for the destruction of his life and reputation. In such cases the courts should examine if the prosecution was malafide, and if it is so found, the police officials involved must be held accountable and the compensation payable to the victim must be recovered from the officers concerned.
4. Cr.P.C should be amended to make it obligatory on the Courts to award adequate compensation to the innocent victim who is discharged or acquitted due to lack of evidence or was falsely implicated.
5. There ought to be separate department/wing for investigation who should be given specialized training on modern scientific basis, in line with the recommendations of the National Police Commission, duly endorsed by the Supreme Court. Independent police complaints authorities must be immediately set up at all levels in line with the Supreme Court's judgment in the Police Reforms case.
6. The trial courts are provided with a medical officer who can immediately examine any accused complaining of torture in Police or judicial custody. The courts must immediately, on any complaint being made, order such examination and take stringent action if the allegation is found true. The number of Trial courts must be greatly increased to ensure speedy conclusions of Trials. Investigations must also be concluded within the shortest possible time and extensions of time must not be routinely given. An adequate cadre of competent defence lawyers must be created to defend those accused who cannot afford their own lawyers. An independent statutory office of public prosecutors must be created.
7. The Police during interrogation or investigation cannot get blank papers signed by the accused; Police officers found indulging in such practice must be severely punished. Narco analysis is a psychologically and physically third degree method of investigation which is not even scientifically proven. It must not be allowed on persons particularly without consent.

8. Persons including officials of Bar Associations seeking to prevent lawyers from representing accused persons must be hauled up for Contempt of Court for interfering with the adminstration of Justice.
9. Special sensitization programmes should be organized for the Judiciary and Police regarding Human Rights.
10. The Governments should provide adequate compensation to the relatives of the person who died due to police firing at Mecca Masjid. No discrimination should be made based on religion or caste or place of residence. Employment should also be provided to the dependents of the deceased.
11. The Media, both Print as well Electronic should be very careful not to publicize mere allegations or claims of the police which can irreparably damage reputations of innocent persons without subjecting them to basic scrutiny.
12. In cases where all the bread earners of a family have been arrested by the police, the families of the victims, especially minor children and desolate women are rendered penniless and helpless and are driven to starvation. In such cases, until and unless the accused are convicted by courts, the State must provide regular financial help to the extent that the education of children is not disrupted and the family is not starved.
13. India must immediately sign the International Criminal Court Treaty known as the Rome Statute which has been signed by most countries.


The tribunal's report will be submitted to the Prime Minister, the Union home ministry and International human rights organisations within a month.
The Tribunal was organised by ‘Act Now for Harmony and Democracy’ (ANHAD) and ‘Human Rights Law Network’ (HRLN) in association with several Civil and Human Rights group like PUCL, APCLC, CLMC along with Siyasat Urdu Daily. More than hundred Civil rights activists, academicians, judicial luminaries and media persons participated in the tribunal apart from victims and their family members.
(Mahtab Alam is associated with Association for Protection of Civil Rights (APCR) and can be reached at mdmahtabalam@gmail.com)