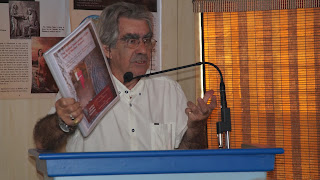 Bhopal . There are strong resemblances between Indian tribal community's knowledge traditions and megalith structures of France. Calculation of time as seen in tribal community is also seen in megalith structures in Brittany (France).  The information related with rotation of the Sun and temple architecture is similar at both the places. The views were expressed by renowned anthropologist Dr Serge Le Guirriec in a special lecture on 'Hidden Laws of Mother Nature' in Makhanlal Chaturvedi National University of Journalism and Communication.


Having conducted comparative study on megalith structure of Brittany and Ancient Indian Hindu Culture, Dr Guirriec said, what Pythagoras has given in theorem was already available in tribal community and calculation based on the theorem is seen in megalith structure. He, during his stay in Chhattisgarh, had found a tattoo on tribe woman's body and the similar shape was found in megalithic structure in France. He said a temple of Danteshwari Devi near Jagadalpur (Chhattisgarh) is a good example of geometric calculation. Describing megalith structure as a book, spreading from India to France, Dr Guirriec said, the knowledge of the book started from India and evidence substantiated the facts. He called upon to protect megaliths structure in India, quoting that such structures were destroyed two years ago in Karnataka for land. He said the knowledge expanded in entire world could be seen in three parts - Egypt, India and Middle East.

Chairing the programme, university vice-chancellor Prof Brij Kishore Kuthiala said there is need to see entire science - physics, chemistry and others in holistic manner to understand the nature better. The holistic approach to see the science has been in Indian knowledge tradition. He said, Delhi like situation could be seen elsewhere if the laws of the nature are not understood. He said tribal community, which is believed to be illiterate, preserved the knowledge through 'shruti' tradition and this is seen in megalithic structure. Head of Communication Research Department Dr Monika Verma conducted the programme. Rector Lajpat Ahuja presented memento and HoD, Department of Advertising and Public Relations Dr Pavitra Shrivastava welcomed the guest.