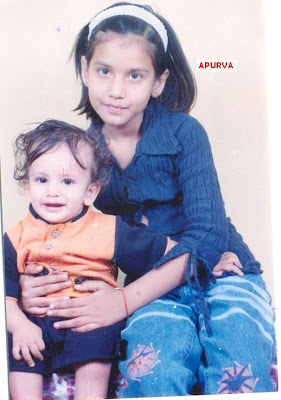 This is APURVA's picture taken in year 2004 with her younger brother.

......just a few moments of yours and wide publicity to help parents get their daughter back…
Hello friends,
I have a very noble cause behind sending this mail to all of you.Please spare some time to read through it. My Army friend met a guy named Mr. Ravi Shankar on the train when he was returning from chennai on 26th of December, 2008. I was having a regular chat with him regarding the Army and its rules and regulations and how the forces are admired in our country.
He then told me about a shocking tragedy that his family went through and hence I write this mail to you seeking your help.

He told me that he was posted in CAR-NICOBAR in the year 2004 as a seargent in the INDIAN AIR-FORCE.. On 26th of december that year his family fell victim to the Unfortunate Tsunami that struck out eastern coast.He along with his wife and two children(photo below) were washed in the deadly waters.Reaching out his wife managed to cling onto A tree but his small son(picture insight on the left)had swollowed too much water and passed away in her arms. Ravi also in desperation to swim lost grip of his daughter's(APURVA) hand.

She was washed away and was never to be found again,until one day they came to know of her being sighted at a relief camp. On contacting the authorities they came to know that this little girl
Was abducted from the relief camp and was missing again. Since then Mr. Ravi shankar has been travelling to chennai every year with a hope to see his daughter. He has been publishing MISSING coloums in major daily's in chennai,and he showed me how heavily these newspapers had a charged him for a those ad's. One of the major newspapers charged him a whooping amount of 12000 rupees

for a 4 X 4 cm ad(that too on the fourth page). Please donot consider this mail a regular chain mail and do care to forward this to your near and dear ones. He requested me to do something to reach out to people who use e-media(internet etc.).I myself have posted her picture on my blog and i request people who own there personal blog pages to post this girl's picture there as it could be of significant help. In case any news of any nature is found regarding her (APURVA) please drop in a mail at the below mentioned mail id's or the following address.