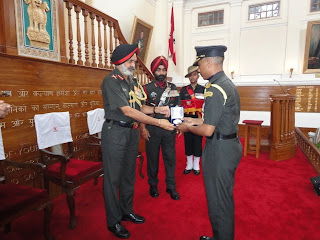 Dehradun- 30 Aug 10A total of 26 Gentlemen Cadets of the Permanent Commission (Special List) Course Serial No. 23, passed out today as commissioned officers amidst grand ceremony at the renowned Chetwode Hall of the Indian Military Academy. The ceremony was presided over by Lt Gen RS Sujlana PVSM, AVSM, VSM, Commandant, Indian Military Academy. The course trains selected personnel from the ranks on the Indian Armed Forces found suitable to be given commission in the Indian Army. Lt Gen RS Sujlana PVSM, AVSM, VSM, Commandant, Indian Military Academy in his address to the passing out course said, I immensely appreciate your consistent efforts to reach this goal; it is indeed a praiseworthy and distinguished achievement. You need to continue with the same zeal during your service as an officer. He further said, As commissioned officer, there will be great stress on qualities of leadership, moral, physical courage, discipline, loyalty and integrity towards the nation. This can be achieved only by persistent hard work, ability and dedication. The Commandant also congratulated the families of the newly commissioned officers. The Gold Medal for standing first in the order of merit was awarded to Gentleman Cadet Kanchan Sikdar of the DOGRA Regt. The Gentlemen Cadets turned officers, could be distinctly seen full of pride and enthusiasm as they look forward to serve as officers of the Indian Army and live up to the glory of this premier institution.09837261570