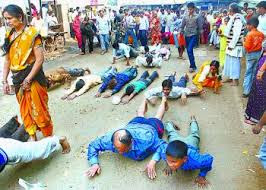 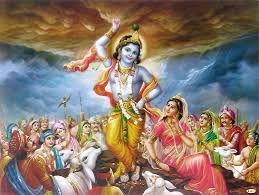 The day after Deepawali is celebrated as Govardhan Puja (गोवर्धन पूजा this year Thu, 27 Oct 2011) when Mount Govardhan, near Mathura, is worshipped. Pious people keep awake the whole night and cook 56 (or 108) different types of food for the bhog (भोग - the offering of food) to Krishna. This ceremony is called annkut (अन्‍नकूट) which means a mountain of food. Various types of food – cereals, pulses, fruit, vegetables, chutneys, pickles, and salads – are offered to the Deity and then distributed as prasada to devotees. This festival is in commemoration of the lifting of Mount Govardhan by Lord Krishna.
According to a legend, before Krishna was born, Indra, the god of Rain, was the chief deity of Vraj. Then Krishna instigated the people to stop worshipping Indra. Indra wanted to show his power over Krishna and brought about a cloud-burst which flooded the countryside for many days. People were afraid that the downpor was a result of their neglect of Indra. But Krishna assured them that no harm would befall them. He lifted Mount Govardhan with his little finger and sheltered men and beasts from the rain. This gave him the epithet Govardhandhari. After this, Indra accepted the supremacy of Krishna.

In the temples in Mathura and Nathadwara, the idols of the deities are given milk bath, are dressed in shining attires with lots of ornaments. After the offering of prayers, sweets are raised in the form of a mountain before the deities as ‘Bhog’ and after that the devotees approach the mountain of Food in order to take prasad from it.
According to the Vedic scriptures Giri Govardhan is greater than even the transcendental kingdom of Vaikuntha (बैकुण्ठ) , the eternal abode of Lord Vishnu.
|| श्रीगिर्रिराज धरण प्रभु तेरी शरण ||