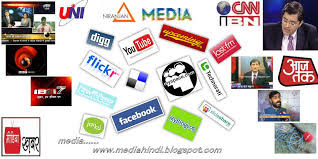 INTERESTING ARTICLE ON OWNERSHIP OF MEDIA .....ONE MUST READ
Who owns the media in India ?......?

Let us see the ownership of different media agencies.

NDTV: A very popular TV news media is funded by Gospels of Charity in
Spain Supports Communism. Recently it has developed a soft corner
towards Pakistan because Pakistan President has allowed only this
channel to be aired in Pakistan . Indian CEO Prannoy Roy is co-brother
of Prakash Karat, General Secretary of the Communist party of India .
His wife and Brinda Karat are sisters.

India Today: Which used to be the only national weekly which supported
BJP is now bought by NDTV!! Since then the tone has changed
drastically and turned into Hindu bashing.

CNN-IBN: This is 100 percent funded by Southern Baptist Church with
its branches in all over the world with HQ in US.. The Church annually
allocates $800 million for promotion of its channel. Its Indian head
is Rajdeep Sardesai and his wife Sagarika Ghosh.

Times Group is owned by Bennet & Coleman. 'World Christian Council'
does 80 percent of the Funding, and an Englishman and an Italian
equally share balance 20 percent. The Italian Robertio Mindo is a
close relative of Sonia Gandhi.

Star TV: It is run by an Australian, who is supported by St. Peters
Pontifical Church Melbourne.

Hindustan Times: Owned by Birla Group, but hands have changed since
Shobana Bhartiya took over. Presently it is working in Collaboration
with Times Group.

The Hindu: English daily, started over 125 years has been recently
taken over by Joshua Society, Berne , Switzerland .. N. Ram's wife is
a Swiss national.

Eeenadu: Still to date controlled by an Indian named Ramoji Rao.
Ramoji Rao is connected with film industry and owns a huge studio in
Andhra Pradesh.

Andhra Jyothi: The Muslim party of Hyderabad known as MIM along with a
Congress Minister has purchased this Telugu daily very recently.

The Statesman: It is controlled by Communist Party of India.

Kairali TV: It is controlled by Communist party of India (Marxist)

Asian Age and Deccan Chronicle: Is owned by a Saudi Arabian Company
with its chief Editor M.J. Akbar.

Gujarat riots which took place in 2002 where Hindus were burnt alive,
Rajdeep Sardesai and Bharkha Dutt working for NDTV at that time got
around 5 Million Dollars from Saudi Arabia to cover only Muslim
victims, which they did very faithfully...

Not a single Hindu family was interviewed or shown on TV whose near
and dear ones had been burnt alive in Godra, it is reported.

Tarun Tejpal of Tehelka.com regularly gets blank cheques from Arab
countries to target BJP and Hindus only, it is said.

The ownership explains the control of media in India by foreigners.
The result is obvious.

PONDER OVER THIS. NOW YOU KNOW WHY EVERY ONE IS AGAINST TRUTH, HOW
VERY SAD. DON'T FORGET TO SHARE, LET THE TRUTH BE KNOWN TO EVERYONE

After giving some substantial proof, I suppose, your reporting, and I quote,"Tarun Tejpal of Tehelka.com regularly gets blank cheques from Arab countries to target BJP and Hindus only, it is said." dilutes the authenticity of other belaboured investigative reporting you do. "Blank cheques," "it is said." such statements certainly reduce the impact of other factual data. It would be better, in my humble opinion, if you would confine to hard facts that you seem to gather well. meticulously. I admire your reporting.