We have lost a precious Diamond of Indian origin. 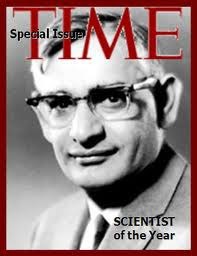 Have you ever seen a Diamond? Some of you will reply Yes, while some of you will reply No.I have seen a shining Diamond.I have seen it in magazines, on the web, etc.Not the Diamond in the form of a stone but I have seen the real American Diamond of Indian origin- Dr Hargobind Khorana.
He was born on January 9, 1922.He was an Indian-born American biochemist.He was born at Raipur, Punjab, British India.His father was the village ''patwari'' or taxation official.He was home schooled by his father until high school.He earned his B.sc from Punjab University, Lahore in 1943, and his M.sc from Punjab University in 1945.In 1945, he began studying at the University of Liverpool.After earning a Ph.D in 1948, he continued his postdoctoral studies in Zurich (1948-1949).Subsequently, he spent two years at Cambridge University.In 1952, he went to the University of British Columbia, Vancouver and in 1960, moved to the University of Wisconsin-Madison.In 1970, Dr Khorana became the Alfred Sloan Professor of Biology and Chemistry at the Massachusetts Institute of Technology, where he worked until retiring in 2007.Dr Hargobind Khorana shared the Nobel Prize in Physiology or Medicine in 1968 with Marshall W. Nirenberg and Robert W. Holley for research that helped to show how the nucleotides in nucleic acids, which carry the genetic code of the cell, control the cell's synthesis of proteins.Dr Khorana and Nirenberg were also awarded the Louisa Gross Horwitz Prize from Columbia University in the same year.Dr Khorana became a naturalized citizen of the United States of America in 1966, and subsequently received the National Medal of Science.He was a member of the Board of Scientific Governors at The Scripps Research Institute.
Unfortunately, Dr Hargobind Khorana died of natural causes on November 9, 2011 in Concord, Massachusetts, USA at the age of 89.A widower, he was survived by his children Julia and Dave.
I know that most of you would be shocked after hearing the death of Dr Hargobind Khorana.I think most of you was not familiar with the news.How would you know?The news about the death of this Indian Diamond was not published in Print Media.I read the newspaper daily, but I found it unbelievable that on the next day of his death, the news was not published.Now, you will think that why I am publishing this article after 15 days of the death of Dr Khorana.I awaited for the news since two weeks, but I found it funny that the Media was in a long sleep. When I was unable to tolerate this irresponsibility of Media, then I finally publish that how Media neglected a true real-life superstar of India.The Media is the most important for the society.But this Media has also a great downfall in the past 5-6 years.This incident of Dr Khorana is a shame for all the mediapersons of Print Media.I don't think that most of the Reporters of Print Media even knows about Dr Hargobind Khorana and his glorious life, then how will they publish about him.The mediapersons only Know about Mr Amitabh Bachchan and his family, that's why nowadays they only publish about them continuously since 10-20 days.Even their entry was not allowed in the hospital were Aishwarya Rai was admitted, but they continue to publish useless news about their new member.They got enough time to collect the useless news about Bachchan's family even not get a single hour to publish the news about Dr Khorana.They started to make future of the upcoming member of the Bachchan's family by some astrologers when the baby was not in the world.But they neglect the present about Dr Khorana.I want to tell the big personalities of the Media that make the mediapersons awake.Do some work that they don't neglect the society otherwise that day is not too far when the society will start neglecting the Media.
Now, I would like to conclude by saying a few words about Dr Hargobind Khorana.In every moment of his life, he kept our country's glory up.Media has neglected him, but the society will always remember him.May God continue creating real Diamonds like him.May his soul rest in peace.